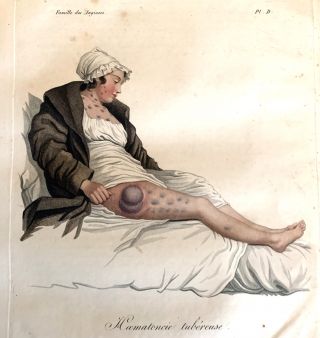 First edition of an anonymously published work by Hutchinson, exceedingly rare with only 4 known copies (3 in the UK and the Yale copy in America). Hutchinson was not a physician, but interested in the activities of medical men, including the so called quack practitioners. He cites physicians that do not look to the patients symptoms and only guess what diseases they might carry. He here writes on the human frame (skeleton), describing his positions about numerous subjects, such as the motion of bodies in fluid, the quality of matter placed in the stomach and of the juices secreted into it out of the blood, the circulation of blood in animals, a description of the ducts for secreting, and the glands for collecting juices out of the blood, the state of the operations in a healthy person, the effects of too much heat and too much cold, the use of purges, diuretics, cupping and scarifying, blistering, smoking, or chewing tobacco and snuff, and his observations and comparisons between the effects of eating fresh fruits, greens, etc.

Hutchinson (1674–1737) was born at Spennithorne, near Middleham, Yorkshire. He was privately educated to be a land steward when in 1700 he met John Woodward, the Duke of Somerset’s physician and became interested through him in natural philosophy. He collected fossils and made observations for Woodward, who apparently was to have written an account of the creation and demonstrate the error of Newtonian concepts. Woodward used his fossils but never wrote his treatise. Therefore, Hutchinson produced his own alternative account that rejected Newtonianism because it conflicted with revelation, especially on vacuum and gravitation. What was surprising was that his alternative natural philosophy drew attention and persisted throughout the eighteenth and into the nineteenth century, winning him many disciples. He continued with a major interest in the geological theories by Thomas Burnet and Woodward, stoking the flames of a controversy as to the relations between geology and the book of Genesis.